Memories of Tom Moran by “JSD” 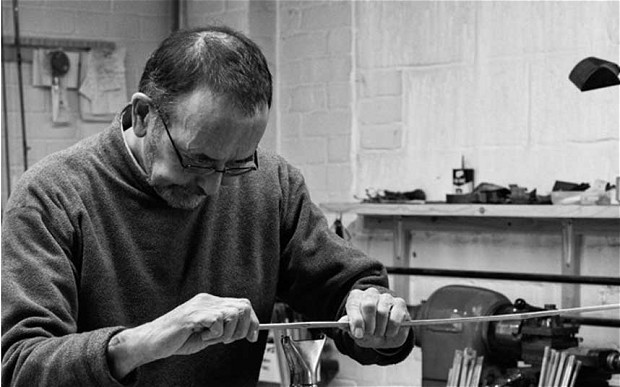 Thomas Moran was born in 1948 in Penang, British Malaya. He was the son and namesake of a British serviceman, while his mother, Clara Montano, was Filipino. At the age of two, he was sent to England to live with his grandmother in Southport, Merseyside. As a boy, he had a deep fascination with the natural world and had a particular interest in all things aquatic.

He was a very creative person and he needed a medium in which to pour his creativity. Very literally, rod making was the answer to his desperate plea for something meaningful. In his twenties and staying at a holiday cottage in the Lake District, he happened upon a couple of old Hardy cane rods… and that was it; the bamboo spoke to him.

His son said he LIVED rod making. When he wasn’t grafting, he was innovating – it was 7 days a week, including Christmas, honing his craft and paying his dues. The real crucible was the finishing; he lived anywhere between the sheer elation of getting it right, and the absolute dejection of a varnishing process gone wrong. Such was his obsession he made a special room in his house a room- barely the size of a closet. He cut holes in the floor to accommodate the dip tanks, which protruded down through the kitchen ceiling below. The zen art of “Bamboodo” exacted total commitment.

By the mid 1980′s his rods were starting to become famous – people from all over the world began showing up at his house to talk rods. Japanese, Dutch, Americans – people who would usually have no business on a Redditch council estate, all came to talk to Tom who used to give away hard fought rod-making advice freely and without a second thought; such was his generosity and enthusiasm for the craft. At this time he also did work for Alan Bramley managing Director of Partridge Hooks who had a business in Redditch and this increased his fame.

My first knowledge of Tom came about in 1987. I had just joined the Pickering Angling Association in North Yorkshire. Pickering Beck and the other Club waters are small streams with much tree cover.  A short rod is essential and I resolved to buy one.

At the end of 1987 I was privileged to travel down with a group of Yorkshire men headed by Mike Mee to fish the annual Grayling match against members of the Piscatorial Society.

Tradition dictated that at the end of the match on the Saturday night Yorkshire members and invited guests would have a dinner at the hotel where we were staying.

On that evening I happened to be seated between Oliver Edwards and Hans Weilenmann a Dutch fly-casting champion. During the course of the evening, discussion turned to the question of which rod I should buy for fishing at Pickering on their small rivers.

I asked for their opinions about all the top rods –should I get a Sage, Hardy’s, or Orvis rod? After a period of reflection Hans said “Buy a Tom Moran rod.”  I at that time had not heard of that rod and my initial reaction was to say ”Who is he?”

Hans went on to explain that Tom was one of the world’s greatest rod builders and would “make a rod to measure” with two tops.

He explained it was a split cane rod with a fast action, 7.6 feet long and ideal for such waters.  I asked him why he would choose such a rod and he told me on a cold winters night when it was snowing he would often get out the rod to admire it, and think of a warm summers evening with rising fish.

He told me he never did this with his carbon fibre rods.  That was a recommendation!

At this point Oliver Edwards interrupted the conversation and added that that it was THE rod to buy and he would let me have details as he had seen them at the Gamefair and tried one. They cast perfectly. Such a recommendation from two top anglers was enough for me and I firmly resolved to buy one.

A few weeks later when Oliver had provided the phone number I rang Tom and we had a discussion about the rods.

I settled on the following Rod:

There was a further discussion about the reel seats.  Tom had a friend in the USA who made stocks for guns and as a by-product and he had off cuts in rare woods.  We settled on American Black walnut as the reel seat.

A few months later the rod arrived and it has been my pride and joy ever since.

Why was Tom such a great rod maker?

Well with the rod was a note about the construction of the Rod which reads as follows:

“Of the first importance is the stability of the bamboo section, a resilience achieved by selection of bamboo poles with suitable fibre density and fixing the moisture content through controlled heat treatment and heat cured resin adhesive process, and by the same means obtaining optimum stiffness.

Prior to bevelling nodes are heat straightened and filed flush and the split strips are lightly hand scraped to remove the outer enamel only. Special care being taken not to remove any of the out of power fibres

To accurately cut the six strips identically to the required compound taper the devil has a 5 inch taper control schools along the length of the bed in much the same manner as a Garrison planeing former but working vertically and under specially designed HSS milling cutters.

Cutting is performed in a three-part process of reduction so that in the final cut strips are very flexible and conform accurately with the tapering former bed.

In lamination on the heat curing melamine-urea-formaldehyde adhesive is used which gives the section on indestructible bond. Glue lines are critically inspected and any which are not 100% perfect are destroyed.

The rod finish is the result of exhaustive experiment over many years and I believe the quality is amongst the very few critically fine finishes in the world.

The actions are being developed to produce a balance of casting efficiency and delicacy of presentation- ability to cast a narrow loop with fast dampening for line control accuracy, with fine tips to cushion takes with light leader tippets.

Rods are individually registered with the customer.

My Rod I have since learned was stored, split, milled and glued at what was known as “the rat pit” at that time – a miserably gloomy rented space in Redditch town centre. It was barely lit, damp and only a Health and Safety visit away from being shut down. From these inauspicious beginnings the blanks would then come back to his house, a three-bedroom terrace on one of Redditch’s new council estates. They were finished upstairs in a converted bedroom complete with a lathe. The Rod Bags were sewed together by his wife.

I lost touch with Tom over the years as in 1992 they moved to America where Tom worked with long-time influence and brother from another mother, Tom Dorsey. Emigrating to the States with its great fishing fulfilled a life’s dream for him, but the family moved back to the UK in ’95. Tough times lay ahead and he had to lean on a lot of good friends in those days.  Life was not easy as commercial success didn’t really come to Tom but he was never in it for the money a self-confessed terrible businessman. In 2005 I again got in touch with him in the UK.  The rings on the rod had worn and he overhauled the rod fitting new rings and re-varnishing it.  It looked like new on its return!

However in a funny way his career book-ended perfectly when he joined Hardys of Alnwick, the home of the rods that first sparked his interest in fly fishing, all those years ago. His firm ‘Tom Moran Rod Co’ was passed to Callum Gladstone; a fine rod maker in his own right, and who was held by Tom in the highest esteem.

I never met Tom and only spoke to him on the phone. In June 2014 I went to Alnwick on holiday and I called at Hardy’s Factory and asked to see him. I was informed he had died of cancer some three weeks before.

I was very sad not to have met him but his rod remains with me-a tribute to a great man and a master rod builder.